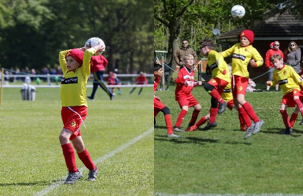 Barney has been playing club football since he was 6 years old for his local team Pinewood FC. He is the only deaf child in the club of 100’s of children aged between 4 and 17yrs old.

He has struggled with hearing instructions at training sessions and at times has misinterpreted words said incorrectly, but with a lot of encouragement and slight adjustments by his two amazing coaches, he is flourishing within his team. Last season his team had beaten 6 rounds of increasingly more difficult teams to reach the Plate Cup Final.

Barney got stuck in as usual, establishing his Centre Midfield presence:  not letting anything passed him, beating everyone in headers, sending some great shots up front, his throw in’s hitting the right players but no-one managing to hit the target .....  0-0 at half time!  We were holding our own and looking even stronger than the opposition which was amazing.

Slight mix up in the 3rd quarter led to the opposition's first goal which was very much against the run of play, but a huge pass from our defence then set up an equaliser worthy of a cup final! We then had to endure another quarter to hold 1-1 at full time;  a result we were not expecting at all.  It was then on to the dreaded penalties which were agony to watch and we eventually lost in round 7.  Final score 3-2.  The boys were absolutely gutted, but after a few choice words from their coaches, the smiles soon re-appeared.

Barney had played so well.  We are so proud of the team’s effort to get as far as they did and the way they handled themselves in defeat.  At times it is all too easy to forget that Barney is deaf on the pitch because his visual awareness of where each player is and how fast they are running is incredible.  He can’t rely on all the shouting going on around so uses his visual skills to the max.  He is determined to keep playing for Pinewood as has made some great hearing friends amongst his teammates.

However, soon after the final he attended an England Disability Football Talent Day and was selected to go through to the Regional talent hub for deaf players.  After the first training session he was then selected to join the Regional Emerging Talent programme which is the pool of players that leads into England squads when he is older!!  So here’s to deaf football too and the hope that he will continue to grow and develop as a player in both the hearing and deaf “worlds”.