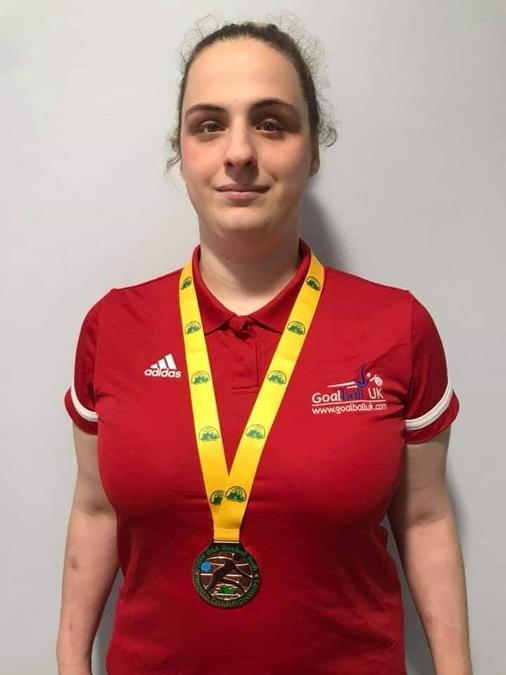 My name is Nansi. I am 19 years old and currently in my first year of studyling law at university. Alongside my Studies I play a sport for people who are visually impaired called goalball. It involves everyone wearing eyeshades so that everyone’s vision is on a level playing field. The court is 9 x 18 m the same size as a volleyball pitch. Each team is made up of three players a centre player and two wingers and the aim of the game is to get the ball into the opposing teams goal.

The ball has bells in it so that we can hear where it is and stop it from going into the goal. The sport can be played at national and international level. I started playing last September and the sport has made me grow so much as a person. It has massively improved my confidence and also my fitness.

Back in school I really struggled with my mental health and coming to terms with the fact that I was blind and I never believed I would be able to do half the things I am doing today. I isolated myself and didn’t want any help or support that was offered to me and I refused to step out of my comfort zone and do anything independently. Now, I am living independently in halls of residence two hours away from home, I travel up and down the country to go to different tournaments and training camps and most importantly I believe that I can have a happy and fulfilling future.

I have been able to have several work experience placements at very respected Law firms in London and in August I also went to Australia as part of the under 19s GB youth team to play the goalball World youth Championships where we received a bronze medal and I scored my first international goal.

I just want to say that it is possible to have a good life despite having a visual impairment and that you can achieve what you want to achieve, yes your visual impairment might make it a little bit harder and put a few more obstacles in the way but you must have the fight and determination to find a way to get you what you want and what you need. And also something which is very important is to use the services available to you.

The sensory consortium has been involved in my life since I was six months old and they have been a massive help they have provided me with many hours of in school support and habilitation training. They also signposted to other services like Berkshire vision and British blind sport which can help you get involved in other activities and when they do grasp the opportunities offered to you with both hands and get the most out of them which is something I wish I had done earlier. But as cliche as it sounds nothing is impossible even the word itself says I’m possible.